In order to understand ear conditions, it is important to learn about the ear. The ear is made up of four parts: 1) the outer ear or pinna, 2) the external ear canal, 3) the middle ear, and 4) the inner ear. Each of these areas is susceptible to infections or injury. Infections of the ear canal are commonly known as “swimmer’s ear” infections. Young children have a greater tendency to get middle ear infections (otitis media). Both ear canal and middle ear infections are very painful and often require medical and sometimes surgical treatment. A good ear examination is necessary to determine the source of the problem and how to treat it.

Some of the disorders we treat include:

Whether you’re young or old, ear infections are both painful and unwanted. Ear infections can be caused by a number of different factors, including: earwax impaction, trauma to the inner ear canal, or allergies. We provide a number of testing and diagnostic methods to recognize your ear infections and recommend the proper course of treatment. Ear Canal Infections, a.k.a. otitis externa, swimmer’s ear – Also known as “swimmer’s ear,” outer ear canal infections result from bacteria or fungus causing the canal to swell. Moisture in the air or swimming makes the ear more susceptible to this type of ear infection.  Symptoms include severe pain, itching, redness and swelling in the outer ear that leads to a “plugged” feeling and often muffled hearing. There also may be some fluid drainage. Pain is worse when chewing and even touching the outer ear can be quite painful. Treatment of otitis externa usually requires ear drops and can be simple to manage if caught early.  Complications from untreated otitis externa may include hearing loss, recurring ear infections, or bone and cartilage damage. Sometimes an ENT can help the process by clearing out the infection in the office with specialized instruments. Most outer ear infections resolve with appropriate treatment in about a week. Middle ear infections, a.k.a. otitis media – Middle ear infections occur behind the ear drum and can be caused by either bacterial or viral infections. These infections may be triggered by allergies, infections elsewhere in the body, or a blocked Eustachian tube that connects the ear to the back of the nose. This is the most common type of infection in children, although it can occur in adults as well. In some cases fluid may linger in the middle ear and cause muffled hearing. Treatment of otitis media depends on the cause of the infection and ranges from oral antibiotics to surgical insertion of a pressure equalization  tube to drain fluid from behind the ear drum. Often enlarged adenoid tissue in the back of the nose is the root cause of the problem by obstructing the Eustachian tube. In children, an adenoidectomy is sometimes necessary in conjunction with tubes. An eardrum perforation (tear or hole) can result from a variety of causes, including trauma, (e.g. Q-tips) rapid pressure changes with diving or flying, infection and previous surgery.

What problems can an eardrum perforation cause?

How is an eardrum perforation treated?

First, a thorough examination by the ENT physician as well as a hearing test will be performed. If the perforation is new, then efforts first focus on identifying and treating the potential cause of the perforation, such as an ongoing infection. Many new eardrum perforations will heal on their own, so you and your ENT physician may opt for a period of observation however, chronic or longstanding eardrum perforations are not likely to heal on their own and a procedure or surgery may be recommended to repair the eardrum.

Placement of ear tubes (a.k.a. tympanostomy, myringotomy with tube placement, ventilation tubes and pressure equalization tubes) is one of the most common procedures performed by ENT doctors. In children, it requires a very brief general anesthetic delivered by mask (no intubation and usually no IV). It is a safe, quick and relatively painless procedure. Using a microscope, a tiny scalpel is used to make a small incision in the eardrum. Any fluid in the middle ear is then suctioned out and a small plastic tube is positioned into the hole in the eardrum.

Most tubes are designed to stay in place for 6-12 months and the vast majority fall out on their own during this time frame.

When are ear tubes needed?

Usually, ear tubes are recommended for one of the following reasons:

These are guidelines from our national academy that give specific recommendations about when tubes are and are not recommended.

Keep in mind that these are only guidelines and particular aspects of your child’s case may prompt a different recommendation. For example, we tend to offer ear tubes more liberally in at-risk children, such as those with  preexisting hearing loss, a developmental problem, speech delay, blindness, or cleft lip and palate.

The physicians at Peak ENT will spend the time to counsel you and help determine the most appropriate treatment for your child. Cholesteatoma is a chronic ear disease in which skin cells become trapped under the eardrum or ear canal skin. Because skin cells constantly shed and replicate themselves, this can lead to an expanding “mass” when this skin is trapped in an enclosed space. This mass can lead to increased problems as it grows, including recurring infection and drainage from the ear, hearing loss and eventually permanent damage to the inner ear or balance system. An untreated cholesteatoma can even erode its way into the space around the brain and cause potentially life-threatening infections in this area.

When cholesteatoma is identified, additional testing will likely be ordered to determine the extent of disease. This typically includes an audiogram (hearing test) as well as a high resolution CT scan of the ears. Surgery is usually needed to eradicate the disease and repair the eardrum and other parts of the ear or hearing mechanism that may have been damaged by the disease. Larger cholesteatomas may require multiple surgeries to fully address the issue and restore hearing.

Otosclerosis is a condition affecting the temporal bone, the bone containing the structures of the ear. Normal bone becomes replaced with disorganized “spongiotic” and “sclerotic” bone. This usually affects the part of the temporal bone around the oval window, which is the interface between the stapes, or third bone of hearing and the inner ear.  This causes calcification and stiffening of the ligament that supports the stapes, reducing its ability to vibrate and transmit sound effectively. This causes a conductive hearing loss, which implies a mechanical problem regulating sound from the environment to the inner ear, where it is detected. In some cases otosclerosis may progress to the inner ear itself, causing a sensorineural hearing loss. Otosclerosis affects up to 10% of the white population. It is much less common in other ethnic groups and impacts women more commonly than men. It occurs in both ears to some degree in the majority of patients, though it may progress at varying rates. Otosclerosis also tends to run in families.

Treatment Options for Otosclerosis include Hearing Aids and Surgery.

What happens during surgery?

Surgery is usually performed under general anesthesia. Depending on the size and shape of the ear canal, surgery can often be performed with a single small incision hidden inside the ear canal. Occasionally though, a small extension of the incision out of the ear canal and into the crease in front of your ear may be needed. The eardrum is lifted up to access the middle ear. A small portion of the innermost ear canal bone is removed to access the stapes and oval window. The stapes is separated from its attachment to the incus. A laser is then used to divide a tendon attached to the stapes, as well as the portions of the stapes connected to the footplate (part that is within the oval window). The stapes is removed with the exception of the footplate, which is left in place. A laser and very tiny drill is used to create a precise hole in the footplate into the inner ear. A prosthesis called a stapes piston is then positioned between the incus (hearing bone that was connected to the stapes) and the hole (stapedotomy), thus restoring the connection between the mobile hearing bones and the inner ear. The eardrum is then repositioned and secured in place with some tiny pieces of absorbable packing sponge. Vertigo is a broad term used to describe an abnormal sensation of motion.  Typically this is described as a “spinning” sensation and is a specific type of dizziness. Despite “vertigo” often being offered as a diagnosis, this is actually only a symptom and is an indicator of a wide variety of diagnoses. A thorough evaluation by an ENT doctor, including a comprehensive audiogram (hearing test) can help determine the specific cause of your vertigo symptoms. Once a cause is determined, an appropriate treatment strategy can be established. Some of the more common causes we see at Peak ENT include:

Benign Paroxysmal Positional Vertigo (BPPV) – This condition typically causes intense vertigo symptoms that come on suddenly due to a change in position such as rolling over in bed, sitting up, or looking up and to the side. The vertigo lasts seconds, but recurs frequently and can be quite scary and disruptive. It is not at all uncommon for patients with BPPV to end up in an ER thinking they are having a stroke! Despite this, the condition can often be cured in one or two visits to the ENT doctor.

Vestibular Neuritis/Labyrinthitis – Typically a viral infection that causes inflammation of the balance nerve and/or inner ear on one side. This results in severe vertigo that can last up to a few days, followed by a period of recovery that can take weeks.

Meniere’s Disease – an inner ear disorder that causes episodic vertigo, fluctuating hearing loss and tinnitus (ringing/buzzing), as well as a sensation of fullness in the ear. This is a chronic condition that usually affects one ear, however may affect both eventually. Medical and surgical treatments are available to help manage this condition.

Migraine – Not widely recognized as a cause of vertigo, migraine is actually quite common. When this diagnosis is made, it can usually be managed by identifying and modifying various lifestyle triggers for migraine, as well as treatment with prophylactic migraine medications in appropriate patients. 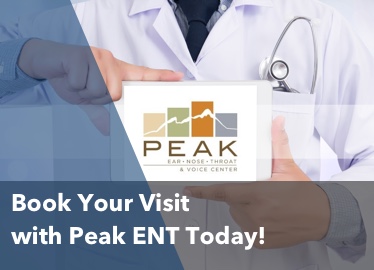 Scroll to Top
Call Us Now